Please prove that you are not a robot.

The Most Important Thing

Published by nicolebrokaw on November 5, 2018 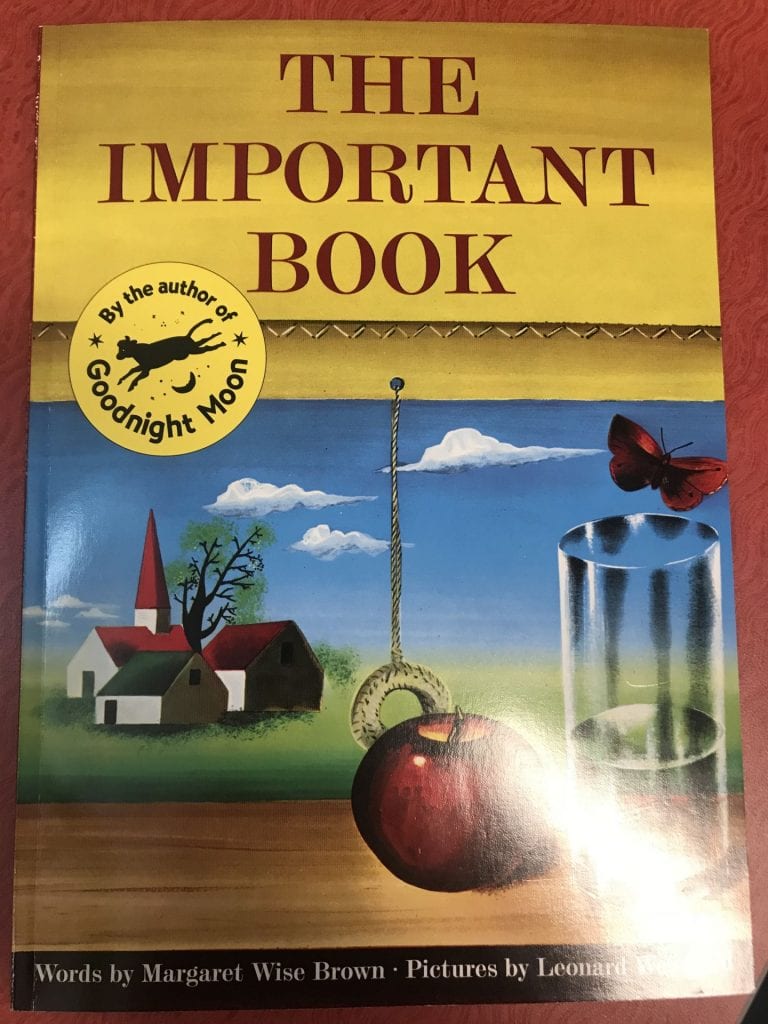 After reading the book “The Important Book” By Margaret Wise Brown, we wrote our own important thing poems.

The important thing about a best friend is

that they are always by your side.

sister.  They stand up for you.

They care about you. But the

important thing about a best friend

is they are always by your side.

The important thing about a book is

you can read it.  It can educate you too.

It can teach you.  But the important thing about

a book is that you can read it.

A Song By Layla

The important thing about a song is

it helps the artist express their feelings.

It makes you want to express your feelings,

it makes you want to dance, or feel empathy

for the artist when you hear the music.

But the important thing about a song is

it helps the artist express their feelings.

The important thing about maple leaves is

they are colorful.  They blow in the wind like feathers.

They fall on the ground in Autumn.

You get to jump into giant piles.

But the important thing about maple leavers is

Published by nicolebrokaw on October 22, 2018 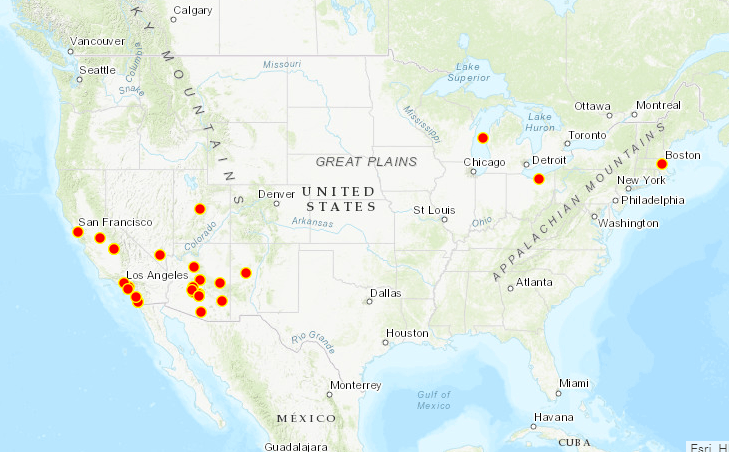 The students in our class traveled all over this fall break!  The map above shows some of the places they went to.  Keep reading to find out about some of their travels!

Today I will be sharing where I went for fall break in 2018. The place I went to has lots of history. The place is in The European Union. It borders the Atlantic Ocean.  Any guesses where I went? Okay, I will tell you right now.

I went to Portugal! The way we got there was we flew from Phoenix, Arizona to Newark, New Jersey. Then when we landed in Newark, we had a 5 hour overlay for the next flight. We got on the plane then flew to Lisbon, Portugal. When we got there we ordered an Uber to our Portuguese apartment.  It was in an old building that they turned into an apartment.

Then, when we got to Portugal we walked a lot and looked at some cool shops. I walked inside some shops and I bought a new jersey from my favorite soccer player, Cristiano Ronaldo.

Last we went to some other cities in Portugal but I am talking about the last day right now. For breakfast we started off the day at a café. Then for lunch we drove to the worlds nicest McDonald’s. The McDonald’s was super cool because you can order on screens that wait on the screen to get your food. Then a couple hours after that we ate at Hard Rock Lisbon it is probably the only American food in Portugal but that’s okay.

It was a super fun trip going to Portugal. We went to very old church’s that were build in the 1500’s. Portugal is a great place for history and a good place for swimming only when its hot. Because when I went to the Atlantic ocean to swim in it, it was cold 🙁.

This fall break I went to California, it was amazing. Now, where do I start? Well let me see, I think I’ll start when we were on the road to California. It was a little boring but it went faster then I thought it would.  It went fast because I was watching movies the whole way over.  Now, the next part when I’m actually in California.

Okay, now I know where I should start. When we got to Cali I went to our apartment, which was beautiful.  I was so happy we were in Cali. The first thing that we did was go out to eat. Then, we watched Ghost Busters and I feel asleep.  The next day I went to the beach and it was super fun except for getting sand in my swim suit. We played in the sand and my dad buried me in the sand.

Second, I went to Legoland and went on a dragon roller coaster and it went super duper fast.  After, we went on a ride that flips you up, sideways, and even upside down. Then after that was done (two hours later) we on a submarine and saw the fish and sharks.  We had to look for treasures and enter it on an iPad.  That was like a game.

Third, we went and got ice cream and cotton candy.  It was so delicious. Then the next day I got my face painted. Then the day after that we went to an Italian restaurant and the waiter was super nice.  He made me a really good Shirley Temple.

Well, that’s the end of my trip to California.  Hopefully we do it again. I had so much fun and it was amazing.  See you next time California.

Published by nicolebrokaw on August 29, 2018 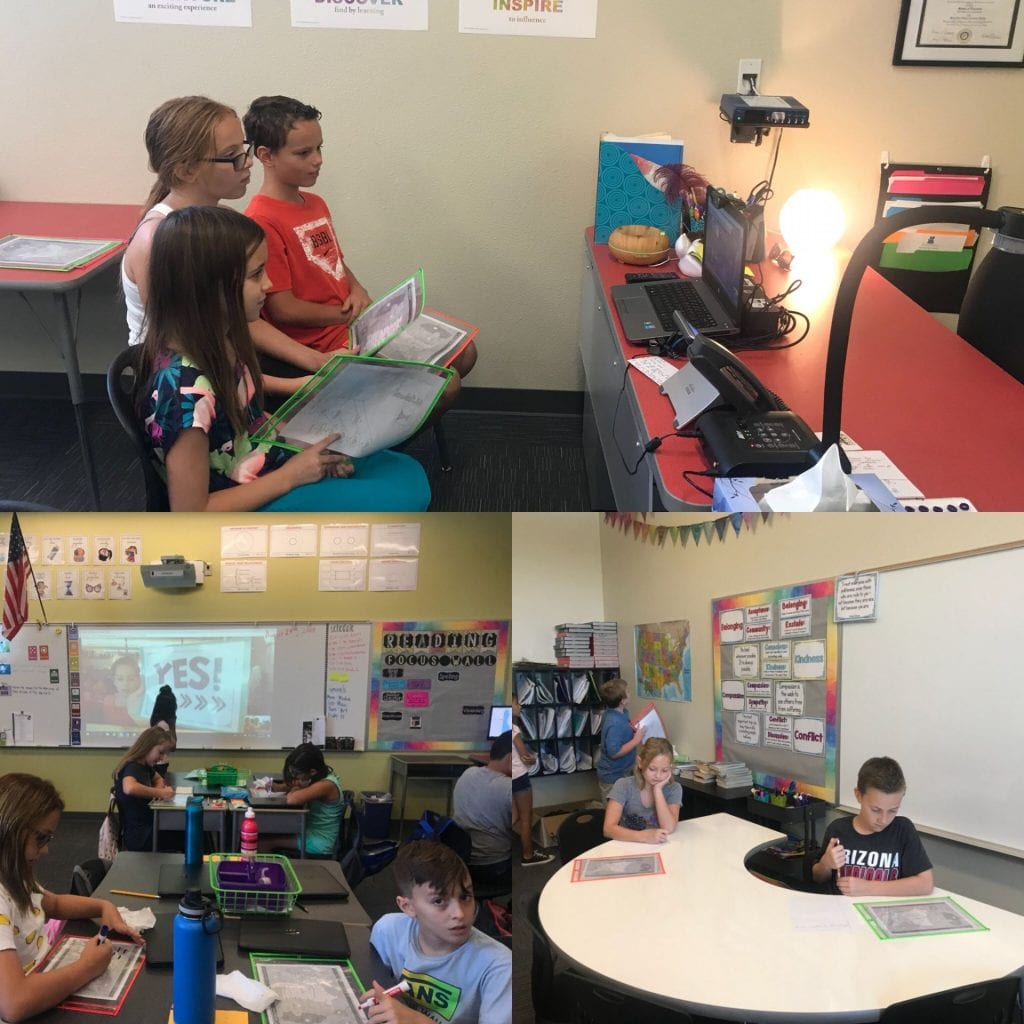 Wyoming was our first Mystery Skype.  We found out it was with the Wyoming State Museum.  The teacher at the museum told us a lot of history about the museum.  There was a lot of ancient stuff.

Florida was our second Mystery Skype.  It was our first Skype with a real class.  Their school was in Wauchula.  We learned that it is always raining or humid in Florida.  They were a fourth grade class.

Ohio was our third Mystery Skype and our second real class.  We found out their location first.  They were a fifth grade class just like us.  When we knew each others locations we shared facts and asked questions.

By Ellie and Reese 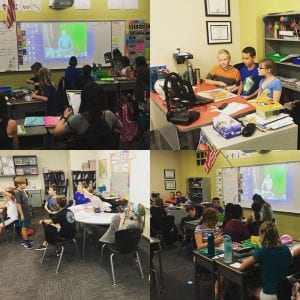 Mystery Skype is where you Skype classes and figure out what state they are in.  It is like a game, who gets the state right first wins.  Mystery Skype is fun because you can meet real people anywhere.

Our first Skype we met this guy named Nathan.  We guessed his state right, it was Wyoming.  He asked if we lived in Wyoming too, but we said no.  Nathan told us about his job.  He works at a museum.  He told us about Wyoming and Yellowstone National Park.

When we had our first Skype it was fun and exciting.  Mystery Skype is fun because we get to talk to other people from different places we haven’t been before.

By Bryan and Hayden 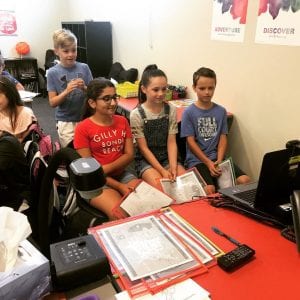 Mystery Skype is where you can call someone through a website.  You can video call a classroom or just a teacher in general.  So how you can do the game Mystery Skype is, you try to guess the state the classroom or teacher is in.  You say things like, “do you border California?”

Not long ago, my classroom Skyped with a teacher named Nathan in a museum.  It was pretty cool because after we guessed where Nathan was (Wyoming State Museum) he told us lots of information.  In Wyoming, there are geysers and a bunny that changes different colors over time.  The bunny was adorable.  In the museum there was this hat made of feathers.  The feathers represented a good thing the chief has done.

If you could Skype with anywhere in the world, where would it be and why?

Published by nicolebrokaw on August 16, 2018

Hello, let me tell you a bit about our class.  We are Ms. Brokaw’s homeroom in 5th grade.  We do social studies and ELA.  We have 20 people in our class.  There are eight boys and twelve girls.

Now let me tell you a bit about our school.  We are two stories high.  We are a kindergarten-sixth grade STEAM school.  Our school is a new school (just over two years old).  We are an elementary school.

Hello, we are Ms. Brokaw’s students.  Some things about our class is that we are a great class.  We love being kind and loving to all others.  Our class is a 5th grade class, so we do a lot of hard work.  Our subjects are ELA and Social Studies, which are amazing subjects.  If you don’t already know our teacher, her name is Ms. Brokaw and she is awesome!

Our school is amazing!  One thing that is special about our school is that we are a STEAM school.  Our principal is great and our vice principal is awesome too!  Our school is a two story school and we have class on the second floor.  All our specials teachers are great and teach well.  Just like our normal teachers.

Powered by WordPress | Hosted by Edublogs | Protected by CloudFlare